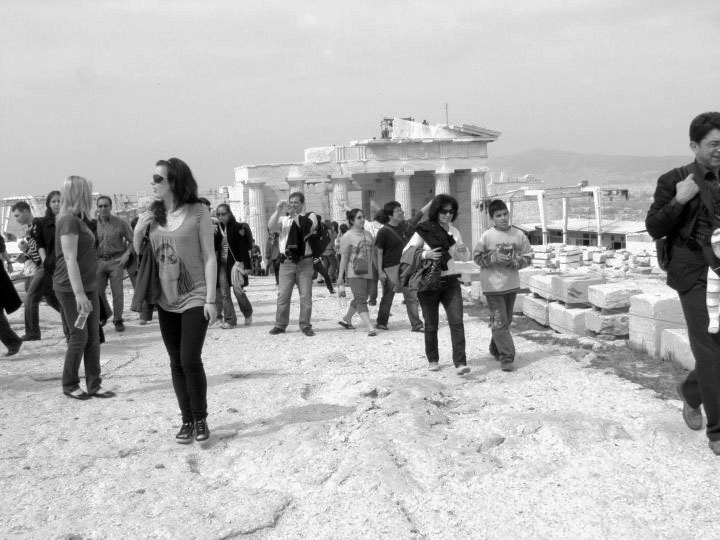 Maaaaaaaaan, do we have some sketchy stories to tell about being females traveling abroad! Like most female travelers, we have found ourselves in some very uncomfortable situations. After all, in a country where not only is the language completely different but so are the culture and customs, we are bound to accidentally find ourselves in some questionable scenarios.

But hey, isn’t the strangeness and unfamiliarity all part of the attraction to travel? So we’re not going to stop traveling because of fear, are we? NO. Although some situations can somewhat be avoided, how can you be safe while traveling?

You can’t entirely guarantee that you will be safe and this applies whether you’re in your own backyard or someone else’s on the other side of the world – and I don’t mean that literally.

We’re trying to avoid actually being IN someone’s backyard, as in 6 feet under…

See how my my mind automatically goes straight to the morbid ending? I blame my mother for this. She refuses to keep a shovel in her trunk for fear it might be used to knock her out AND to dig the hole (true story).

However, the fact that my mind does acknowledge the possibility that something bad could happen is probably what has potentially saved me from some bad situations.

Here is me sharing some of my wisdom. Some of which I stole from Oprah.

1. Never let your guard down.

Just because you are blissfully frolicking through the fields of “somewhere city, somewhere country” doesn’t mean you won’t be a target for a sniper. Maybe this is drastic, but there is no such thing as a “I’m a tourist and therefore untouchable” cloak of safety that magically shrouds you when traveling. You don’t have to walk around with your face smeared with Vaseline and earrings taken out ready for a fight just don’t let your guard down.

You are a tourist and will be a target for something. This is the mindset you need to have.

2. Pretend to be married and that your husband is right around the corner.

*YES – HUSBAND even if you are a lesbian.

This means either wear a fake wedding ring or be ready to slip one onto the appropriate finger if you run into an awkward situation.

One of my many married stories. While walking on a very busy Istanbul street, I was followed by a man who suddenly appeared by my side and a little too close. Michelle was with me so I wasn’t even alone. Sometimes it just doesn’t matter if someone is with you.

As he asked me a series of questions, I could feel his hand slide up to the back of my arm. Quickly, I jerked my arm away from him and put my hands behind my back and moved a finger from my right hand over to my left ring finger. He was too busy talking and looking at my (covered) breasts to notice…

I quickly flashed my (newly) married hand in his face and I told him we were meeting my husband who is Turkish (I was making pointing gestures) who was waiting at the corner and to please go away before he got me into trouble. Worked instantly and he actually panicked a bit.

Side note: He actually did walk up to a man on the corner and started talking and pointing in our direction, but Michelle and I picked up our pace and got lost in the crowd. Also know as going into “stealth mode”.

I learned this from Oprah.

Back in my teen days, my mom would always be watching Oprah around the time I got home from school. I would watch the show with her as this was our way of “bonding” and her way of “parenting”. See…back in those days, Oprah covered some informative and controversial topics and many times, those topics would trigger the start of many conversations.

On one particular show, Oprah was interviewing a woman who had been brutally beaten and raped. The victim talked about how something felt “off” about this person who showed up at her door asking to use her phone, but she didn’t want to be rude so he let him in against her “gut” feeling. Does this surprise you?

Think about how many times you just smiled and were polite as possible in an uncomfortable situation because you didn’t want to be viewed as rude or bitchy.

Side note: Back in my younger years, before cell phones, it was common for someone to knock at your door asking to use the phone.

Oprah talked about how women are conditioned to be nice and how we need to learn that being rude is okay.

Do NOT be afraid of being rude of even appearing to be rude- it could save your life.

Women have it. It’s a gift. If you feel like something is off, then it is. Don’t try to find an explanation for how you feel, just trust it. And see # 3 – don’t worry about being rude or feeling like you are crazy – just go with your intuition.

Check out this YouTube video by Gavin de Becker – The Gift of Fear.

Walking straight, head up and with shoulders slightly back which not only helps to make your boobs look bigger, but also makes you appear like you have confidence.

Hey, I know you have confidence, but make sure it shows in your body language. Walk and stand like you own that place and that you will f&%# someone up if you need to.

*This also means you don’t walk while fidgeting with your smart phone. Especially because your eyes diverted down makes you a target and someone will stab you for that phone (not kidding).

Side note: If you are lost, find a safe location to check your phone or ask for directions preferably from a store owner or other employee. Not the dude on the street who could be a Ted Bundy copy cat killer. He’s either going to want money for helping you or he’s throwing you in his nearby vehicle.

And this should probably be a 5.5 or a new #6, but don’t ever allow yourself to be distracted by simple questions like someone asking for directions or asking for the time. Or any type of question that needs you to look down at your watch, phone, shoe? etc.

Something learned in Krav Maga – hold your phone up, look them in the eyes – take a pic of the person and happily give them the time from your phone and/or directions.

Here’s some cool stuff about Victim Selection posted on Protective Strategies, but before you click on that, read on.

6. Do not accept drinks from anyone, including women.

One night, while at a popular club in London, I was approached by a few women who were super friendly. They poured on the compliments and asked where I was from and all those other standard questions. One girl tried to tell me she was from Kansas – yet she had a British accent. Go figure. They proceeded to escort me to the bar to “buy me a shot”.

Something definitely didn’t feel right and before I could even say “no,” my friend came up and very bluntly told them to “fuck off.” Suddenly, these women changed their demeanor and scurried off.

Bizarre. But my friend, a London local, explained that these “friendly” women are part of a sex trafficking ring who are paid to deliver drunk, preferably lesbian women to men. I’ll cover more of this in a future blog.

So please, do not accept drinks from anyone and be mindful of the quantity of booze you are drinking.

My girlfriend introduced me to Krav Maga and out of all the self defense techniques I have studied, this is the best – by far. Krav Maga is the official hand to hand combat system of the Israeli Defense Forces. You are not taught just a series of moves that will help you win a tournament, you are taught usable moves and techniques for real life situations. It seriously is life (and body) changing.

Warning – this class is not for the dainty types. Only those serious about protecting themselves should join.

8. Know the culture and customs of the country you are visiting.

Come on ladies…do I even need to elaborate on this one? No brainer. Don’t get me wrong however. Not following a custom or culture is not an open invite for assault. Ever.

One time, in Morocco, Michelle and I found ourselves in the back of a van. A tour van. See where your mind went?? Good, you’re learning.

So while in this van things got awkward. Intuition vibes were going and being rude was not going to work so plan C went into action. Which was me “answering” a phone call from a friend who was waiting for us. A future blog will go more into this – but the gist is, if you need to: act. Act like you have people waiting for you, like you’re a nut, act confident, act like you will slice a throat, if necessary. Throws them off, every time.

Just because you have wanderlust doesn’t mean you just up, leave and fully disconnect. Even if you are going on a solo – “find your mind” trip, share your plans and check in every so often even if it’s just on social media. Your family and friends should know where you are at all times.

Side note: Since the original writing of this post, I found a great app for planning your trip. It’s easy to share your itinerary and it’s free! Planapple.

Last but not least, don’t let your loved one read this because then they freak out and worry about you when you are traveling. Then you will be lectured about how you should not go to <insert country>.

But hey, you can’t blame them. They watched a LOT of Oprah.

Meanwhile, God forbid something happens to you, but if it does – it is NOT your fault. Nothing you did, wore or said gives consent or is an open invite for assault on any level. Report it and get help immediately.

Be safe and enjoy the world.