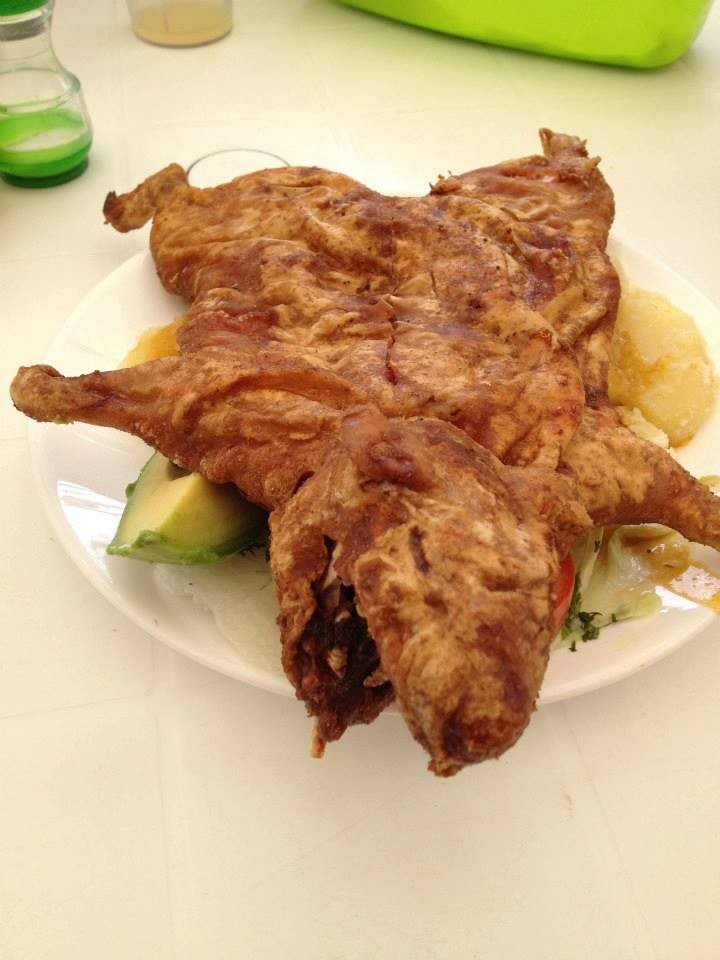 From Fugu to Guinea Pig – 5 Strange Delights to Try While Traveling!

I travel to eat.

Being able to experience new cultures, learn about local lifestyles and seeing jaw dropping natural and man-made wonders amongst all the other benefits from traveling are great bonuses but at the end of the day, all I want to do is devour any new cuisine or cocktail a city has to offer. As a consequence, I run (roughly 4-5 miles a day) my ass off in between trips to counteract the glorious calories I’ve ingested during my travels and it’s worth every drop of sweat. I’m often asked, “what’s the craziest thing you’ve ever eaten?” And well, this is my response to that very question.

First, you should know that I grew up in an Asian household and although we live in the U.S., we stuck to the Asian mentality that anything is edible. So while my elementary classmates ate their Captain Crunch cereal and PB&J sandwiches at school, I had rice and tripe with fish sauce packed in my Transformers’ lunch box.

Our family dinners always had rice paired with anything from a good ol’ American ribeye to blood sausage with bitter melon…and celebrating holidays continue to make me laugh when I look at our Thanksgiving day spread of broccoli casserole (thanks Paula Deen!) and turkey next to eggrolls and fried chicken feet.

So it’s hard to say what the craziest thing is that I’ve ever eaten because what is crazy to you may be a normal Wednesday lunch for me.

Instead, here are some of my most interesting eats:

This is an Asian delicacy and was often a treat my parents would make for me. As a child, I would gobble up these pre-hatched embryos, slurp the egg juice and wash it down with a nice cold yoohoo. I loved these suckers. But as I grew up and I started to realize exactly what were in these eggs…I mean, the poor little baby duck has feathers and eyes!…I became grossed out and could not stomach them anymore. Then I visited Hanoi, Vietnam where these are available at numerous street vendors so I attempted to revive my childhood delight and I ordered one. That’s as far as I got. One look at the poor little creature and I couldn’t do it so this is one cuisine I will have to consider history that I will not repeat again.

Who can say no to tasting something that could kill you? Fugu, the Japanese word for pufferfish, is a prized dish commonly offered in Japan and requires expert preparation. In fact, I personally would never try this anywhere else but in Japan because Fugu poisoning is 1200 times stronger than cyanide and in Japan there are super strict regulations to ensure the safety of consumers. It’s not worth the risk to try this dish anywhere else but from the heartland. The risk of human error didn’t dissuade me and as soon as I cleared customs at the Tokyo airport, I went straight to Torafugu Tei in Shibuya, Tokyo to get this pufferfish into my belly.

The classic preparation is sashimi style. Dip these deadly slivers of fugu into some soy sauce and it tastes

like nothing more than a thin chewy piece of latex dipped in soy sauce. I also tried the chargrilled version and poached version but it basically has a semi-tasteless flesh that makes you forget what all the fuss is about…but also makes you thankful to live another bite.

In many countries, guinea pig is eaten like Americans eat chicken.  Growing up in the states, where guinea pigs were often pets…it was hard for me to stomach the idea of trying this when it was offered to me at a roadside restaurant in Quito, Ecuador. But I realized that I suffer from the mindset of “not wanting to see how the hamburger is made” and that this is just like any other protein source that we eat on a daily basis. And boy was it delicious. Imagine the juiciest pork you’ve ever eaten with that fried chicken skin snap and you’ve got it.

My inner teenage self just loves this one. Google any photo of geoduck and you’ll quickly see why. Commonly found on the Pacific coasts, I had my first taste in Seattle, Washington at Taylor Shellfish Oyster Bar. It’s an edible saltwater clam and I had this sashimi style. It was recommended to have this in a clam chowder, but unfortunately I have not been able to try it but I can see why that would be tasty. And it’s pronounced like “gooey duck” which is a fun name all on its own.

Molecular gastronomy is a subdiscipline of food science that seeks to investigate the physical and chemical transformations of ingredients that occur in cooking. Its program includes three axes, as cooking was recognized to have three components, which are social, artistic and technical. Thanks Wikipedia!

One of the best restaurants where I’ve been able to experience this cuisine is Central Restaurant in Lima, Peru. I’m a sucker for any food that I can’t wrap my head around…food science is crazy wicked!

And I can’t end a post about food without at least one obligatory photo of a cocktail…because a tasty cocktail is the best way to wash down any meal.