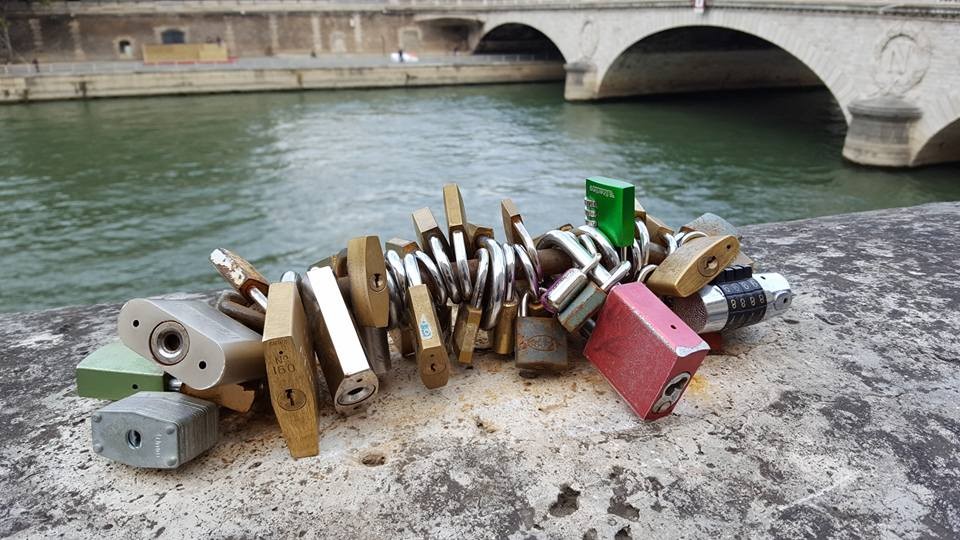 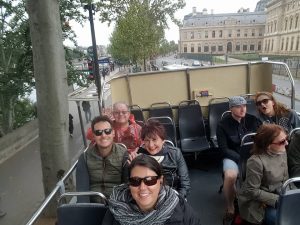 Traveling with your family can be super stressful, yet also make for the BEST stories. Recently, my parents, brother and I finished a 3 city tour in France: Paris, Jouy-lès-Reims & Lyon. There were two main reasons for this trip: to visit my family’s ancestral hometown of Jouy-lès-Reims and to return, for the first time in 20 years, to Lyon where I studied abroad my Junior year in college. First off, let me introduce you to my “special” family. My mother, Pat, a retired English Literature teacher of 35 years, a Sharon Osbourne look-a-like and a woman who still corrects my spoken grammar to this day (I’m 40 year’s old..sigh), is an expert on world religions. This comes in rather handy when visiting centuries old churches and especially helpful when visiting Greece last year and its many religious sites, but I digress.

My father, Larry, a retired insurance agent, unintentionally creates his own language of what we lovingly call “Larryisms”. My brother, Braden, 5 years my senior, well, let’s just say he spends more time on his hair than I do.

Being the Matriarch of the family, my mother, Pat, expects to be catered to when traveling. Having survived Cancer, comments like, “Alicia, please carry my bag. I had Cancer” are not uncommon or out of bounds for her. She has also become more forgetful with her things over the years, perhaps due to her vast knowledge of intellectual subjects leaving little room for common sense.  On the FIRST DAY of our trip, she lost her Paris Pass which provides entry into all of the museums. 5 hours later, I discover it hidden in my bag where she stuffed it, UNBEKNOWNST to me, but it was my fault according to her…SHOOT ME NOW. Subsequently, having left her cell phone in the Louvre bathroom, her bag with her passport on a TGV train car in Paris and having locked herself into a bathroom in Reims leaving her screaming for help (forever engrained in my memory is the French bathroom attendant yelling back “Attention, attention!” while trying to break her out with a screwdriver), I threatened to latch a child leash on her so as to keep an eye on her throughout our trip.

Then there’s my poor Dad, Larry, who still struggles with the English language and, I might add, his FIRST and ONLY language. Comments like, “Pat, we don’t live in a second world country,” or saying “jigsaw” when meaning “hacksaw” or “kilimonators” vs. “kilometers,” sent my mother, brother and I into gut wrenching fits of tearful laughter.

My brother, Braden, seemed to think if he put a French accent on English words that it magically made them French. “Zaynk you for ze Coke. I like eet very much.” “Ze man on ze street smellz like armpito.” “I need zome poudre de ball sack.” Every time we approached a door with a sticker that read “Poussez”, my brother and I couldn’t help but snicker. 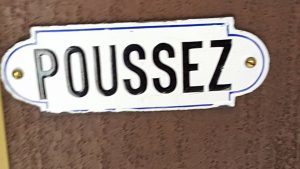 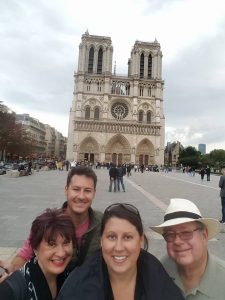 While staying in adjoining rooms in Paris (men in one room, ladies in the other), I plugged my Mom’s hairdryer in the bathroom, turned it on & it quickly sparked fire causing the lights & ALL POWER to go out in BOTH rooms. It was fried.  The hotel hairdryer in our bathroom never recovered so I was forced to use the one in the men’s adjoining room bathroom. My brother and I, having sibling rivalry wars since childhood, quarreled over the hair left on the bathroom toilet after my blow drying session. Did I mention the hotel bathrooms were so small that I could brush my teeth while I pee?  Let’s not even get into the fact that it’s nearly impossible to find a public restroom in France that doesn’t require you to pay a fee. Again, I digress.

If a French person didn’t understand them, my parents seemed to believe that if they spoke English more SLOWLY, enunciated EVERY WORD and spoke more LOUDLY, that this would suddenly make others English speaking….smh. Being a Southern gentleman, my father would frequently attempt to start conversations with strangers while waiting to cross the street at intersections. “How you doing today?” “So, how long have you lived here and what do you do for a living?” Needless to say, he got a lot of blank stares. It took him a while to learn that the French, especially in large cities, do not make eye contact nor rarely speak with strangers on the street. 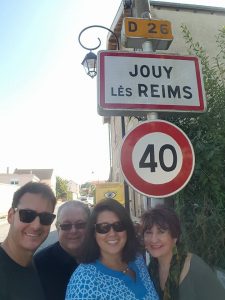 Our 2nd city tour brought us to the small commune of Jouy-lès-Reims (0.72 sq mi & population 185), the hometown of my Great, Great, Great, Grandfather many generations back, Jean Baptiste Barras dit le Blon, who emigrated to Louisiana in 1719 at the young age of 19, and settled in the small Louisiana town of Newroads (previously Pointe Coupee) where settlers were promised free land. Having no known, living relatives in Jouy-lès-Reims, my parents had previously reached out to the Mayor’s office and arranged to meet up with some of the locals during our trip. Odile Crooke, a sweet and jovial local who teaches professionals how to speak English and married to an English man, served as our own personal tour guide; taking us on the most incredible tour of our ancestral hometown. Nestled in the Champage region of France, Odile arranged a private tour of the Cooperative Jouy Pargny where many of the Vineyard owners produce their own champagne.  The Co-Op President, Christophe, gave us a personal tour of the entire facility where we learned every step of the process from picking grapes in the vineyards, to adding sugar and yeast, to the (2) fermentation processes to degorgement (removing sediments) to corking. We also learned that Champagne bottles are thicker than wine bottles so as to withstand the increased pressure and that, with wine, the deeper the indentation at the bottom of the wine bottle, the longer you can keep the wine after opening before it goes bad. The Champagne tasting at the end was icing on the cake! 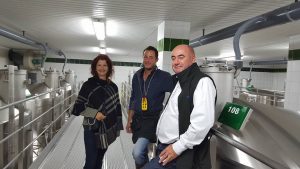 Following the Champagne tour, we met up for a delicious, French lunch at nearby La Garenne restaurant with the Mayor, Sylvie, her assistant, Christine, the Assistant Mayor Jean-Bernard, and Odile’s husband, Phil. We had a lovely conversation talking about our families and family dynamics, about Jouy-lès-Reims, about our professions, about politics and about life. After gifting them with Atlanta Braves’ hats, Georgia T-shirts and Cajun Zydeco CDs, we said our heartfelt goodbyes and knew we would meet again. This was definitely the day we made new, lifelong friends and when our family came full circle. 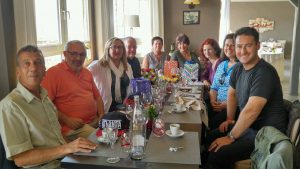 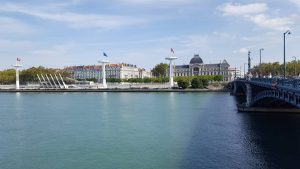 Being the typical, excessive Americans with 8 bags for 4 people, the rental car company gave us a large Renault Trafic van that seats 8 people for our drive from Reims to Lyon. It took me 5 minutes to figure out that you had to lift the manual stick up and then push left to reverse (completely backwards from American vehicles). After a 4.5 hour drive and a few rest stops later with holes in the ground for bathrooms, we arrived in Lyon.

I was like a child on Christmas morning overtaken with excited anticipation. It had been 20 years since I had last step foot in this city that was so life-changing for me in my early 20s. As a student at L’Université Jean Moulin Lyon III during my Junior year in college, it was the toughest, yet best year of my life. It was the first year I had lived away from my family, my first time in Europe, the year I quit my sorority and the year I came out to my family. This was the year I fell passionately in love with traveling and took off on frequent adventures with my Eurorail pass in hand. Stepping out of the car upon arrival in Lyon, it brought me back to my 20 year old self along with a wave of emotions. Over the next few days and being the Gastronomic capital of the world, I would eat the most amazing French food, would visit my old apartment building, my old University and my old restaurant and bar haunts. There were so many new buildings, modernized structures and even a new Tram line. The city was more beautiful than I had remembered and allowed me to rediscover it with my family alongside me.

In more ways than one, I had come full circle on this trip, rediscovering humanity, myself and my family…